Note: This post is from a text file on my hard drive that was created on 9/9/2002 at 9:16 am. I was asked to write it by the Orange County News, a weekly section of the Beaumont Enterprise.

Note: This post is from a text file on my hard drive that was created on 9/11/2001 at 9:19 pm. I then emailed it to my family and friends, and it was passed around the Internet and even reprinted in the Orange Leader and the Beaumont Enterprise.

read more…
Dec 14 2007
The US founding fathers did not intend a Christian nation
Category: Society

I’d been working on a similar draft for months, but I don’t think I could have put it any better:

There has been a lot of bitching about the iPhone lately: no SDK, bricking the phone with the 1.1.1 update, and the price drop to name a few. But in all of the instances I’ve read about, I’m 100% behind Apple. When someone purchased an iPhone, they knew what they were getting: a phone with no 3rd party support and a locked phone that only works with AT&T. If thye weren’t ok with that, they shouldn’t have bought it. Apple publicly announced, and most Apple news sites reported that the 1.1.1 update would possibly brick your phone. The update itself warned that. Any idiot with a hacked iPhone who bricked it because they installed the update got what they deserved. Their problem, not Apple’s. 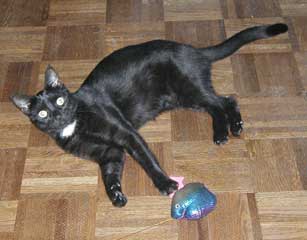 Cell phones have been around for a long time now (I’ve had one for over ten years), and they’ve always had really nice features like a call log (incoming and outgoing), custom ring tones, etc. So why the hell haven’t home phones added these features?

I really can’t comprehend how someone can accidentally get in the express checkout lane with a full basket of groceries. And I really can’t understand why the store staff doesn’t say something.

Once again, I’ve been hit by health problems again. This time it was a abscess on my lower back right below the waist. It became incredibly painful, and boy did it hurt when the doctor lanced it. I stayed in the hospital for four days, and probably close to another four days before it in pain and recovering afterwards. I’m still on antibiotics and it is still there, just not as nasty.